An expensive shade of green: The key aim of the EU Green Deal is becoming the first climate-neutral continent by 2050. Bearing in mind the recent surge in energy prices, how can the EU assure that this rapid shift towards renewable energy does not come at the detriment of consumers and companies who might face higher energy bills as a result?

The European Union’s Green Deal, which was presented in December 2019, is a project that aims to support the transition to a more sustainable European economy. The Green Deal aims to reduce energy prices and ensure a cleaner overall environment, thereby improving quality of life in Europe. In order to reach the ambitious goal of carbon-neutrality by 2050, the intermediate target is to reduce greenhouse gas emissions by at least 55% by 2030. Furthermore, the European Commission proposed the new binding target of a 40% share of renewable energy in the EU’s energy mix by 2030. An increased use of renewable energy plays an all-important role as it can reduce greenhouse gas emissions and the dependency on non-renewable fossil fuels. Although the European Union has been able to move further away from its dependency on fossil fuels, there is still progress to be made. 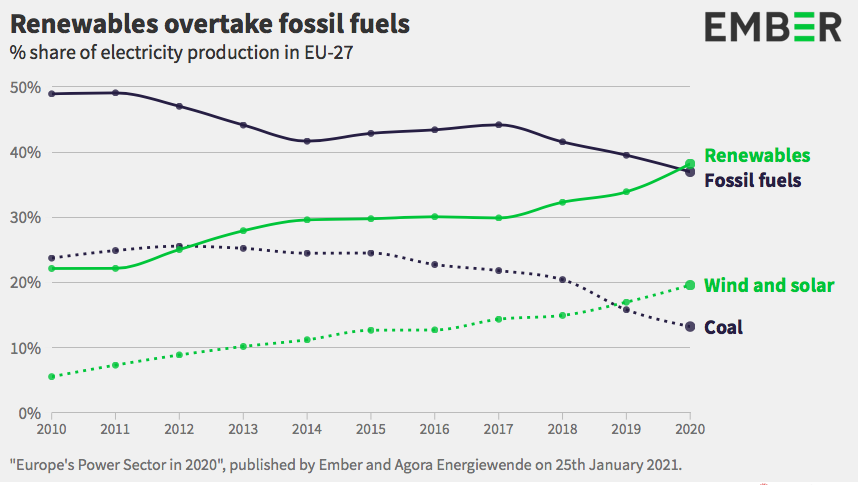 After the Covid-19 pandemic, energy prices soared due to an increased demand after quarantine restrictions were lifted. At the same time, the general supply of fossil fuels (mainly gas) was low, yet Russia, who is the EU’s main gas supplier, was reluctant to stock up its usual gas supplies to the EU, leading to tensions between the two parties. Gas supplies are currently more exhausted than usual at the start of the heating season.

As a consequence of the increase in gas prices, the average electricity price for households have also increased by 230%. This price increase is especially detrimental for financially weak households, on which the COVID-19 pandemic has taken a toll. Furthermore, some renewable energy sources, such as wind and solar energy, can only generate electricity under specific weather conditions, unlike fossil fuels.

Currently, countries continuously use fossil fuels, even though the generation of energy is ultimately pricier than with renewable energy sources. While natural gas and coal make up 35% of the EU’s total energy production, the share of fossil fuels amounts to more than 60% in the Netherlands, Malta, Poland, and Cyprus. These energy sources have a greater energy density (i.e. they require less surface area to generate the same amount of energy) in addition to historically fossil-fuel-intense energy mixes. As the use of coal is decreasing, Member States use natural gas as a pathway to reach renewable energy to achieve their goals of a green sustainable future, therefore further pushing price increases for natural gas.

As part of the Green Deal, all 27 Member States have pledged to reduce their carbon emissions by 55% by 2030 compared to 1990. To achieve the set goals defined by the Green Deal, the European Commission has promised to, over the next decade, allocate at least EUR 1 Trillion to sustainable investments to consumers in aid of measures such as renovating building infrastructures to make them suitable for renewable energy production and supporting households and companies affected by the pandemic.

Even though some of Europe’s oil and gas companies, such as Royal Dutch Shell and TotalEnergies, have started to enter the renewable industry, their firm’s success is still highly dependent on oil and gas. A strategic repositioning of their business models can thus only happen slowly if they do not want to increase the risk of bankruptcy.

Energy suppliers are the bridge between consumers and energy-producers. They buy energy from the producer and distribute it to the consumer. Whether the energy distributed to the consumer is renewable or non-renewable depends on the energy mix of the country and on the market. If energy prices increase, energy suppliers most often will directly translate this price increase to the price they charge consumers for providing them with the energy.

Figure 3: The Key Stakeholders of the Topic.

The unfortunate result of economic unsustainability

Long before the Green Deal was established, countries were already looking for ways to switch to a more sustainable energy system. The high cost of fully implementing renewable energy sources is one of the key challenges to its expansion. As renewable energies typically are expensive to develop, many countries could not continue on with their sustainability projects. While the stronger economies of Western European Countries could increase the affordability and thereby facilitate the switch to renewable energies, Eastern Europe is also the home of big coal mines as these countries have had strong mining industries for decades. If there was a switch in energy sources many coal miners, which form an important role in the working population, would be left unemployed. How can the EU enable the switch to renewables without adversely affecting citizens and the economy of certain countries?

Gone with the Wind

After the COVID-19 pandemic, energy prices increased to reach a record-breaking high of EUR 100 per megawatt-hour on 1 October 2021 – the start of the official heating season in Europe. This marked an increase in the energy prices of as high as 400% when compared to the beginning of the year. As Europe had a natural gas shortage during the pandemic, an increased demand for fuel led to the increase of the gas prices. As a consequence of poor wind production this year in countries like Germany, coal consumption increased again to avoid energy deficits in the country. As of 2021, wind and solar power are the most used and accessible renewable energy sources in the EU. How can the EU make renewable energy more accessible to all, to avoid similar problems going forward?

In 2020, around 8% of EU citizens stated they were struggling to adequately heat their homes, in other words, were suffering from energy poverty. Simultaneously, around 75% of EU citizens still heavily depend on heating systems fuelled by fossil fuels, which further impedes the energy transition. The fact is that not everyone can afford the switch from their coal or gas heating system to one that can be fueled with renewable energy.

Many buildings are not suitable for renewable energy production as they have not been constructed to fit the requirements of such technologies. Due to the main energy source at time of construction being fossil fuels, many buildings’ foundations are mainly geared to them. How should the EU overcome the conflict of improper infrastructure in buildings to be able to speed up the process of shifting towards renewable energy? More globally, how can the EU ensure all its citizens can partake in the transition to renewable energy sources?

The European Commission has stipulated the set of goals of the Green Deal in the European Climate Law, which was adopted on 30 June 2021. This European Climate law is the binding legislative form of the Green Deal. The Effort Sharing Regulation (ESR) is a policy framework which is a part of the EU’s climate goals and is aimed at ensuring that all Member States are contributing fairly to reducing carbon emission. The regulation, which covers 60% of the EU’s greenhouse gas emissions, establishes mandatory national emission reduction goals for sectors such as transportation, housing, agriculture, and waste management for the period of 2021 to 2030.

Additionally, there have been many EU-funded projects whose aim is to eliminate factors challenging the shift to a sustainable green future. For example, the Commission is funding action in Lithuania helping citizens and businesses cut CO2 emissions and lower energy bills. Furthermore the EU’s LIFE Program is funding projects in Poland and Italy of which the purpose is to lower car emissions. Moreover, with the Social Climate Fund, the Commission aims to help citizens suffering from energy poverty with their expenses in their transition to renewable energy products. It will provide the Member States approximately EUR 72.2 billion over seven years in funding to help those in need during the time period of 2025 to 2032.