West Balkan woes: Though the EU has committed to starting accession negotiations with North Macedonia and Albania last year, it remains unrealistic that any Western Balkan country will join the EU within the next years. Taking this into account, how can the EU still facilitate regional economic growth and revive the European perspective for these countries?

The Western Balkans are a culturally diverse region that has been plagued by local political disputes and economic instability. The dynamics between the individual countries are often historically complex. Therefore, it is crucial to focus on the region as a whole, aiming to aid it in dealing with economic struggles, stabilise it politically, and only engage in local disputes when absolutely necessary. The COVID-19 pandemic hit the Balkan region especially hard, and the economy is only now slowly recovering. Moreover, countries like Albania suffer from a sluggish economy ranking terribly on human trafficking indexes and money laundering rankings, which blight the region as a whole.

Serbia and Kosovo, despite engaging in the Belgrade-Pristina Dialogue, appear to be nowhere closer to reaching an agreement on the legal status of Kosovo, a fact that is putting a stop to both countries’ EU accession negotiations.

North Macedonia has had its negotiation progress blocked by the bilateral disagreement with Greece regarding the former naming itself “Macedonia”, with Greece only lifting its veto against North Macedonia entering the EU in 2019. However, the enlargement talks are being stalled as the nation is haunted by similar economic problems as Albania, Bosnia and Herzegovina, and Montenegro, namely rising unemployment rates and increasing government debt. The North Macedonian economy shrank by 4.5% in 2020, and with the COVID pandemic still not completely over, the country, and region, will struggle to recover without EU help.

Figure 1: The West Balkans within Europe.

The focal point of this topic are the West Balkan States, who are each facing numerous obstacles on their path to join the EU.

The abovementioned Commission is the most important executive organ of the EU. It decides where to allocate funding and develops schemes like the most recent Economic Investment Plan, granting EUR 28 billion to the Western Balkan region, however it is also responsible, together with the Council and Member States, for the opening or suspending of negotiations between Member States and the states applying for EU accession, as well as those already in the accession plan.

The  EU’s existing Member States play a twofold role in this debate: On the one hand they, by virtue of being in the EU, can veto any suggestion of opening or continuing the EU enlargement negotiations, like France, Denmark, and The Netherlands did in 2019 regarding negotiations with Albania and North Macedonia. On the other hand, specifically the Member States geographically closer to the Balkan region, are crucial when discussing the political landscape of the region. For example, the dispute between Greece and North Macedonia regarding the latter’s name was holding up any multilateral negotiations until as late as 2019.

Figure 1: The Key Stakeholders of the Topic. 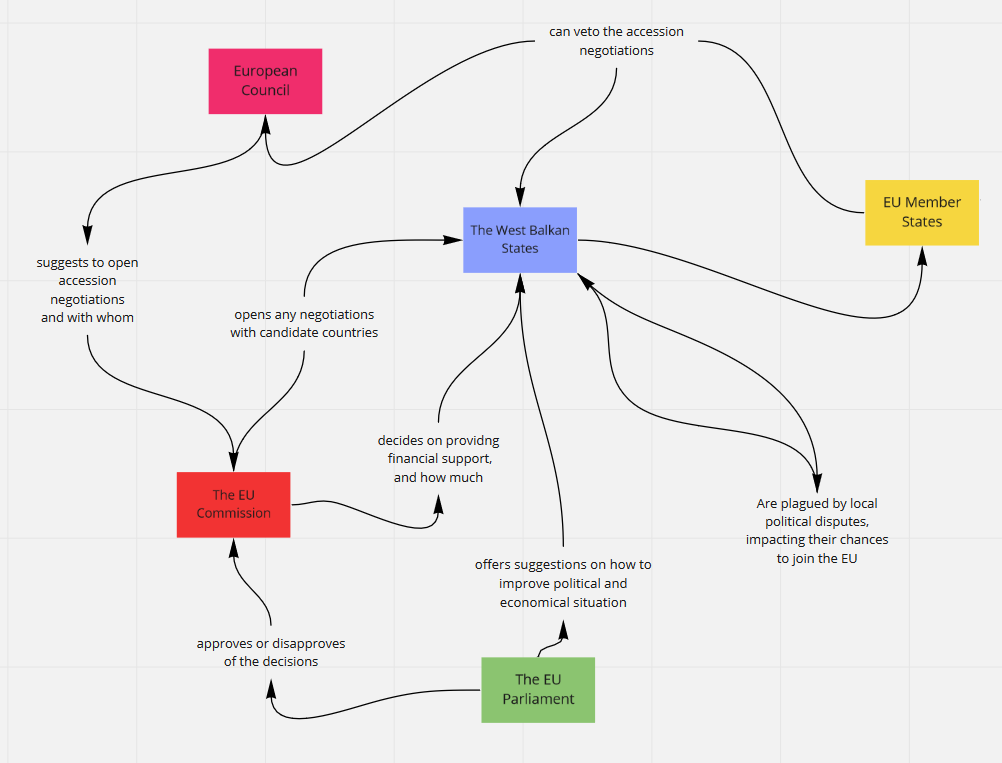 A  major hurdle the West Balkan states have to overcome in order to accede to the EU is stabilising their volatile economies. The region is notorious for its high unemployment rates (male youth unemployment being as high as 33% in the region), which sap the nations of opportunities and fuel economic decline. What is more, countries like Albania are infamous for their drug trafficking. In 2019 alone, marihuana trafficking was projected to account for over 25% of the country’s total gross domestic product (USD 15.3 billion). Human trafficking is also a major problem, with both of these issues paralysing the region’s chances of applying to join the EU.

Countries like Montenegro, on the other hand, also suffer from a lack of media freedom and disagree with the European Commision urging it to accelerate its reforms in the fight for judiciary freedom and against corruption. Bosnia and Herzegovina, which is only a potential candidate to join the EU, is experiencing the same political volatility and unrest. Lastly, the country is split between different religions, the main ones being Christian Ortodox, Catholic, and Muslim. These religious divides lead to a fascinating cultural diversity, but are sadly often the grounds for political or social conflict in the area.

To make matters worse, or rather, more complicated, the region is not only littered with internal disputes, but also challenged by its neighbours regarding land claims and name issues. As mentioned above, Greece had been vetoing what was then Macedonia’s accession attempts until it changed its name to North Macedonia, as Greece claimed it had the right to the name “Macedonia”, pertaining to a northern region of Greece. In addition, a North Macedonian accession is also being vetoed by Bulgaria, which, in turn, has only cited vague reasons of ‘culture, language’ and ‘identity’. Lastly, as mentioned before, Serbia is facing mounting pressure from Brussels over it not recognising Kosovo as an independent state, and the ineffectiveness of the Belgrade-Pristina dialogue.

Major developments in a matter such as this one are difficult to come by, and progress is gruelling and slow. It is made almost exclusively following different summits organised between the Western Balkan countries and the EU, of which there have not been many.

The first of these summits was the Thessaloniki Summit of 2003, where little substantive development was made, but which established the grounds to start future discussions between the then ex-Yugoslavian nations and the EU. During this summit, countries like Albania and Croatia were already identified as potential EU member candidates, however, no legal action was taken to integrate or help them. Following Thessaloniki, there was a period of stagnation when it came to multilateral agreements and development.

A second conference was held in Sofia, Bulgaria, in 2018, yielding similarly fruitless results. Meanwhile, individual countries, such as Serbia, had made small progress regarding a potential EU accession, e.g. in 2008, when the EU granted Serbia a so-called ‘partnership status’, before adopting an official intergovernmental negotiation framework with the country in 2013.

Fast-forward to 2020 and 2021, where there have been a couple of notable strides towards both inner stability and development, and towards accession. Kosovo and Serbia resumed their Belgrade-Pristina dialogue in 2020, but progress is unlikely, as the countries’ troubled pasts stand in the way of a united future.

The final two most recent summits during which most progress was made were Zagreb 2020 and Brno 2021. The former only served as a re-opening of the multilateral discussions since their post-2003 quiescence, but did promise a grant of EUR 3.3 billion to the Western Balkans with the aim of boosting the pandemic-stricken economy.

However, the more recent Brno Summit was more hopeful, with more considerable advancements being made. The main focus of the summit was the pledged EUR 28 billion under the Economic Investment Plan, with EUR 9 billion coming from grants, and the rest from public and private investments. The hope is that this money, provided to the West Balkan region over the next seven years, will help it boost its economy and lift itself out of its current slump. Another crucial result of the Brno summit is the commitment of the heads of state to partake in summits regularly, with the next one being already scheduled for 2022.

A last development achieved outside of the EU-Western Balkan tug of war has been Open Balkan, a mini-Schengen Area for three of the Western Balkan states. Its creation in 2021 was preceded by a three year long series of negotiations between Albania, Serbia, and North Macedonia and it offers, i.a., free access to the labour market of the three member countries. The ambitious goal of having all of the West Balkans join and fully open their borders, however, has been stopped by the dangers of increased drug trafficking and corruption, and the political tensions between current and potential future Member States.