Pacta sunt servanda: According to Article 7 of the Treaty on European Union, aimed at ensuring compliance with basic European values in all Member States, a breach of European law can only be determined by a unanimous vote of the EU’s heads of state and government. Given the lengthiness of the Article 7 procedure and the possibility of alliances among Member States, how can the EU enforce its basic values?

‘If one system of judiciary is broken, the entire EU is broken.’

– Vera Jourova, Vice-President of the European Commission for Values and Transparency

At the heart of the European Union’s legislative system, one finds the Treaty on European Union (TEU), which delineates the fundamental rights and obligations of the Member States and details the structure of the EU. Enshrined in Article 2 at the very beginning of the TEU are certain foundational values of the EU: ‘respect for human dignity, freedom, democracy, equality, the rule of law and the respect for human rights’.
The importance of the aforementioned values for the EU cannot be overstated. But what is to be done if a Member State infringes on these inalienable rights?

For a long time, in the times of the Schumann declaration and for the first EU treaties, compliance with the fundamental values of the European Union was tacitly taken for granted. It is not until the draft Treaty on European Union of 1984 that one finds the first mentions of rule of law provisions, from which point onward they became a standard fixture in European law. Yet Europe had to wait for the treaties of Amsterdam and Nice to have a tool to prosecute infringement of these European values.

Fast forward to Article 7. This Article was created to determine explicit measures against a breach of the values delineated in Article 2. Yet the process described in this article involves many steps and is hence rather slow, even in the best case scenario. The EU is still in want of an effective mechanism for policing the rule of law. 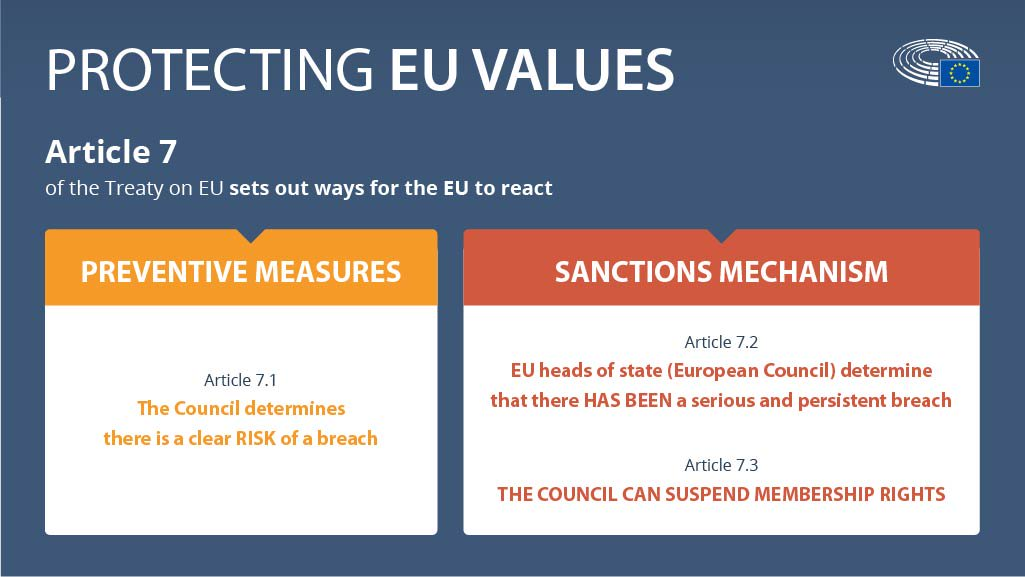 Central to the topic is the European Commission. The Commission can initiate Article 7 procedures, can propose to change the TEU, allocates funds, and can sue for infringement of the EU treaties.

In case of such a lawsuit, one proceeds to the European Court of Justice (ECJ) which decides on the lawsuit.

The European Parliament also has the capacity to begin Article 7 procedures and can propose amendments to the EU treaties in accordance with the procedure of Article 48 TEU.

Lastly, the Member States are subject to these proceedings and require funding, supplied by the Commission. However, as they form the EU Council, they have an active say in the process.

Figure 2: The Key Stakeholders of the Topic.

While the consequences of Article 7, if it were to be applied in its full breadth, would be extreme, the road to that point leads steeply uphill.
Even In its ideal form, the process leading up to an application of Article 7 is long: first, a ‘clear risk’ must be diagnosed, then the European Parliament must put the issue to a vote, after which the country against which proceedings are being held must be heard until finally the Council can issue its decision. Clearly, this procedure inhibits any form of swift action.

On the other hand, there may be some merit in not acting overly hastily. One key reason for this is the Haider affair and its subsequent diplomatic aftermath. After a sequence of bilateral sanctions against Austria outside of the EU framework in the early 2000s after the election of the right-wing populist party Freedom Party of Austria (FPÖ) which were later judged to have been excessive, the right for a country to defend itself was introduced into Article 7. The trauma of this incident still lingers in the European subconscious.

In theory, there is no difference between theory and practice

The above refers only to Article 7 in its ideal form. In reality, the application of Article 7 is often bogged up by alliances between Member States which block any form of significant accountability in the Article 7 process, rendering it mostly ineffective in practice.
Still, in the press, Article 7 is often dubbed ‘the nuclear option’.
The motivation for this name stems not solely from the potential breadth of consequences of its application, but more from its fallout. Indeed, many EU diplomats fear a significant deterioration in the quality of relationships between Member States and a violation of the goodwill mentality that is supposed to be intra-state relations in the European Union. They are concerned that the damage inflicted would be irreversible and long-term, an outcome most would like to avert in the aftermath of having already lost one EU-member. Conflicts also arise between different notions of what a hearing should be. As opposed to the ‘traditional’ hearing form, the interpretation of EU law currently used by the European Commission views hearings as a ‘peer-review exercise’, a process some say comes with an imbalance between powers and questionable prioritisation.

Due to the fact that many EU Member States rely heavily on EU funding for economic growth, withholding such funds might work as a potent deterrent/retaliatory mechanism for countries in violation of EU principles. Here is where another key conflict arises on the ethics of withholding funding from Member States as punishment for their rule of law proceedings. Just recently, the Polish president accused the EU of ‘blackmail’ in the light of their threats to withhold funding from the Next Generation EU recovery fund on the basis of democratic governance. Yet it is not only affected countries which have stated their concerns about such procedures, with the Lithuanian President stating that ‘linking issues about rule of law to funding would entail inflicting ‘unimaginable harm to the European unity’’.

In academia, the debate on what should be done to ensure rule of law and European values has been raging for a long time and a variety of suggestions have been proposed.
Some authors argue the EU should make the rule of law requirement more explicit in its budgeting proposals, even going as far as wanting to force Member States to sign up to the European Public Prosecutor’s Office (EPPO), an EU-wide body prosecuting crimes against the EU’s financial interest. Others also advocate for a ‘EU Copenhagen mechanism’, an EU-wide supervisory and monitoring mechanism tracking the rule of law in Member States with the possibility of ‘freezing’ contested practices and policies in cases of suspicion of EU law breaches. Some even go as far as to suggest financially rewarding Member States for good behavior with respect to European law, a controversial take.

In 2016, the Civil Liberties Committee recommended the establishment of an EU mechanism on democracy, the rule of law, and fundamental rights, a proposal the Commission rejected seeking to avoid duplication. Yet, after this initial setback, many steps have already been made toward the use of funds as a tool for enforcing rule of law.
In 2019, the Commission published a communication in which it outlined its vision for rule of law processes in the European Union. After extensively recognizing the importance of the rule of law for the European Community and acknowledging a variety of stakeholders, the Commission vowed to further support civil society organisations active in the field and intensify its collaboration with national and EU-wide governmental actors. Furthermore, it implemented the ‘Rule of Law Review Cycle’, an extensive monitoring program and the EU Justice Scoreboard, accepting calls out of academia. Lastly, it vowed to pursue a strategic approach to infringement proceedings, as opposed to a case-by-case approach, in order to create legal precedents for future disputes. Reacting to this, in early 2020, the European parliament approved the rule of law conditionality for EU funds yet the ensuing debate about the Covid recovery funds shows the controversies surrounding this step are far from settled. Also questions of reform of Article 7 have still not been breached. There remains a lot of work to do.