I was like Watt: With the EU aiming to increase renewable energy production in its European Green Deal framework to respond to the climate crisis, it has proved challenging to achieve this without giving thorough consideration for energy security. What can the EU do to ensure stable energy generation, transmission, and distribution while balancing renewable energy and energy security goals?

The EU is an active promoter of Europe’s shift to a carbon-neutral society. However, this process has proved to be an arduous one. One of the most effective ways to reach this goal is by increasing renewable energy production because, as of most recently, energy production and consumption accounts for 75% of EU greenhouse gas emissions. Aiming to transform the EU into the world’s first carbon-neutral continent, the European Green Deal features clean energy as one of its main priorities.

Energy security is especially at risk in this context because the EU imports over 50% of its energy. Therefore, a balance should be struck between using renewable energy and ensuring that all Member States have stable access to energy sources. For example, even though the Union has a highly developed energy infrastructure, over 34 million people live in energy poverty. An overarching cause of the energy sector’s unreliability on a local level is that cooperation between Member States, which could take the form of Projects of Common Interest (PCIs) is lacking, along with poor development of infrastructure in rural or very remote areas.

What is certain is that there is a dire need for a shift towards carbon neutrality in accordance with the European Green Deal, whilst ensuring energy security across all Member States. Therefore, all relevant actors in the Union should come up with ways to balance these two goals in order to provide a stable environment for the proper infrastructure to develop.

In 2019, around 40% of EU natural gas imports came from Russia and the EU’s dependence on Russian gas imports shows no signs of lessening. Although the Green Deal envisages a carbon-neutral Europe by 2050, natural gas remains a key part of the energy mix as coal is phased out and renewable energy production levels are not high enough yet to replace non-renewable energy sources. EU domestic gas production is declining, and there is not enough gas at affordable prices from alternative suppliers to replace Russian production. There are fears that Nord Stream 2 will reinforce Russia’s stranglehold on EU energy markets and compromise European strategic autonomy. Gazprom, Russia’s state-owned gas monopoly, has often applied political pressure by using its market power to manipulate gas prices. And with gas prices in Europe skyrocketing, the Kremlin has openly stated that quick regulatory approval of Nord Stream 2 and its operation would reduce gas prices.

Energy production and consumption accounts for more than 75% of the EU’s greenhouse gas emissions. Decarbonising the EU’s energy system is therefore critical to reach the 2030 climate objectives and the EU’s long-term strategy of achieving carbon neutrality by 2050.

The European Green Deal focuses on 3 key principles for the clean energy transition, which will help reduce greenhouse gas emissions and enhance the quality of life of EU citizens by ensuring a secure and affordable EU energy supply, developing a fully integrated, interconnected, and digitalised EU energy market and prioritising energy efficiency, improving the energy performance of our buildings, and developing a power sector based largely on renewable sources.

The European Union Agency for the Cooperation of Energy Regulators (ACER)

ACER was established in March 2011 by​ th​e Third Energy Package legislation as an independent body to foster the integration and completion of the Eu​​ropean Internal Energy Market for electricity and natural gas​. The agency focuses on  developing common network and market rules, coordinating national regulators at the European level, monitoring the well-functioning and transparency of the EU internal energy market, and advising the EU Institutions on trans-European energy infrastructural issues.

ACER works very closely with the Council of European Energy Regulators (CEER). The overall aim of CEER is to facilitate the creation of a single, competitive, efficient and sustainable internal market for gas and electricity in Europe. The CEER acts as a platform for cooperation and information exchange. It assists Europe’s national energy regulators when dealing with the EU and on an international level.

At the end of 2018, the EU updated the EU electricity laws within the ‘Gas Market Design’ package. An integrated EU energy market is the most cost-effective way to ensure secure and affordable energy supplies to EU citizens. The aim is to bring the EU electricity law up to date, taking account of its aim to become completely decarbonised by 2050. The share of electricity produced by renewable energy sources is expected to grow to more than 50% in 2030. In order to increase the resilience of the EU electricity system, each EU country is in the future required to define Risk Preparedness plans to be ready to respond to unexpected situations, working closely with neighbouring member states.

The European Commission is the executive of the European Union. The Commission helps to shape the EU’s overall strategy, proposes new EU laws and policies, monitors their implementation and manages the EU budget. It also plays a significant role in supporting international development and delivering aid.

The Commission is organised into policy departments, known as Directorates-General (DGs), which are responsible for different policy areas. DGs develop, implement and manage EU policy, law, and funding programmes. 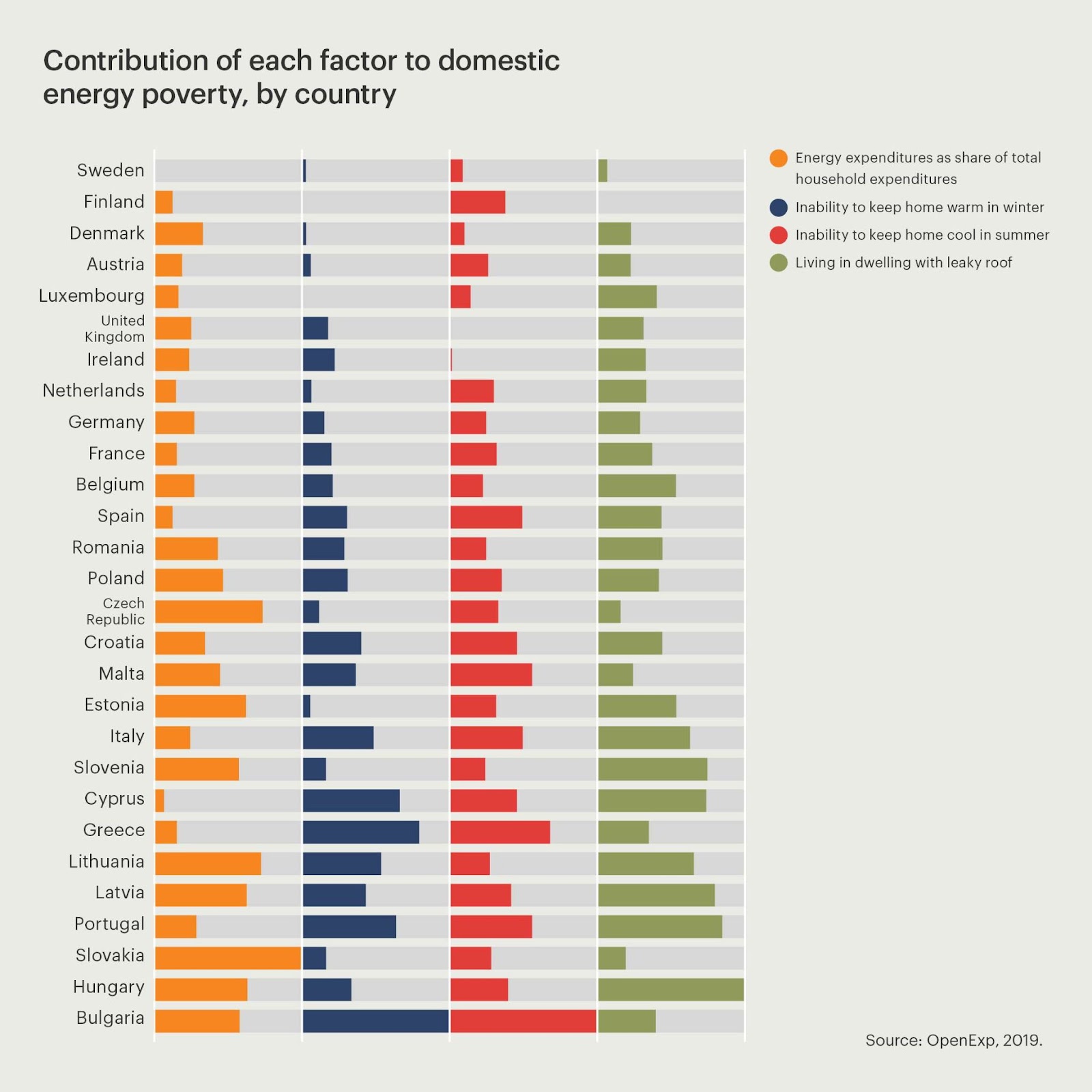 Energy poverty is an ongoing issue, with multiple underlying causes, such as low income, spending a high amount of disposable income on energy, and energy inefficiency. The lack of a common definition for this concept across the EU makes it difficult to combat it on a larger scale and there are very few statistics on it. Moreover, many households do not identify as energy-impoverished, despite fitting into the local category and even if they do, the fact that people are not educated on this matter makes it almost impossible for them to seek out the needed help from local authorities, such as subsidies or schemes devised to help them.

Another challenge for the European Green Deal is the lack of integration between Member States’ grids. Therefore, countries surrounded by water and those in Eastern Europe are in what is called energy isolation. They are dependent upon energy imports, which makes it harder for them to achieve energy security. Implementing clean and renewable energy in these grids has proved to be more challenging because of other primary issues. For instance, the public might not support the interconnection of grids due to misinformation, there may be a lack of funding opportunities for the different energy mixes, and the geographical location of the states’ grids might make it difficult to implement the needed measures.

Despite the advantages obtained through cross-border cooperation projects, such as lower energy prices and market stability for investors, very few states have managed to successfully implement them. Projects of Common Interest (PCIs) and other cooperation endeavours have yielded results which would be virtually unachievable otherwise, reaching higher levels of efficiency. Many such activities, however, are cut off by inefficient negotiations regarding time, strategy, and money. Cooperation between stakeholders and states requires a great deal of trust, will, and an all-encompassing approach. In the current political climate, this type of relationship may be harder to build.

Energy security is a complex issue, tying both into the lack of integration and cooperation between Member States. In the context of this topic, it refers to the situation where a country’s climate means that it cannot source all of its energy from renewable sources, forcing it to import energy from a neighbouring EU state. In theory, this should encourage states to participate in cross-border cooperation so that, in the case of a crisis, the energy supply is more diverse, allowing for power to be distributed more evenly in the Union. Currently, compromises must be made when it comes to how much a country spends on developing or improving its renewable energy infrastructure, in order to provide stable access to energy from other sources. The need for energy security especially slows down the shift towards carbon neutrality in the case of countries whose clean energy infrastructure is less developed or those which do not have access to reliable enough renewable energy sources. This calls for close cooperation between Member States, which, as stated in the two previous sections, is still a work in progress, with the European Commission launching offers for infrastructure development projects.

Things to look at