Committee on  Civil Liberties, Justice and Home Affairs (LIBE I)

A 2020 European Parliament statistic revealed that more than 700,000 people sleep rough every night in Europe, an increase of 70% over the last 10 years. What measures can the EU adopt to reach its goal of ending homelessnes in Europe by 2030?

Over the last decade, homelessness has proven to be one of the most difficult problems the EU has had to tackle. Homelessness levels have risen in most parts of Europe, with almost 700,000 people sleeping rough or living in emergency accommodation living on the streets every night, with Germany and Slovakia leading and having the largest homeless population per 10000 people. Factors such as the growing housing costs1Housing cost is the total of the monthly housing expenses divided by the monthly income expressed as a percentage and the cut in social programmes over the past years, have proven to play a major role in this issue. According to a 2020 statistic published by Eurostat, housing costs have shown a huge increase in the last decade, presenting almost a 5% growth each semester.
Now more than ever, the absence of adequate housing has become a major issue for European Countries, since all the previous factors have been exacerbated by the COVID-19 pandemic. Homeless people find themselves in a vulnerable position as they are a medically high-risk population with a high prevalence of respiratory diseases and less access to medical care and public health information. The pandemic also had a serious impact on many EU countries’ economies, which resulted in increased unemployment rates. Consequently, as housing costs are getting higher, so are the homelessness rates, since many people can’t afford the rising costs. 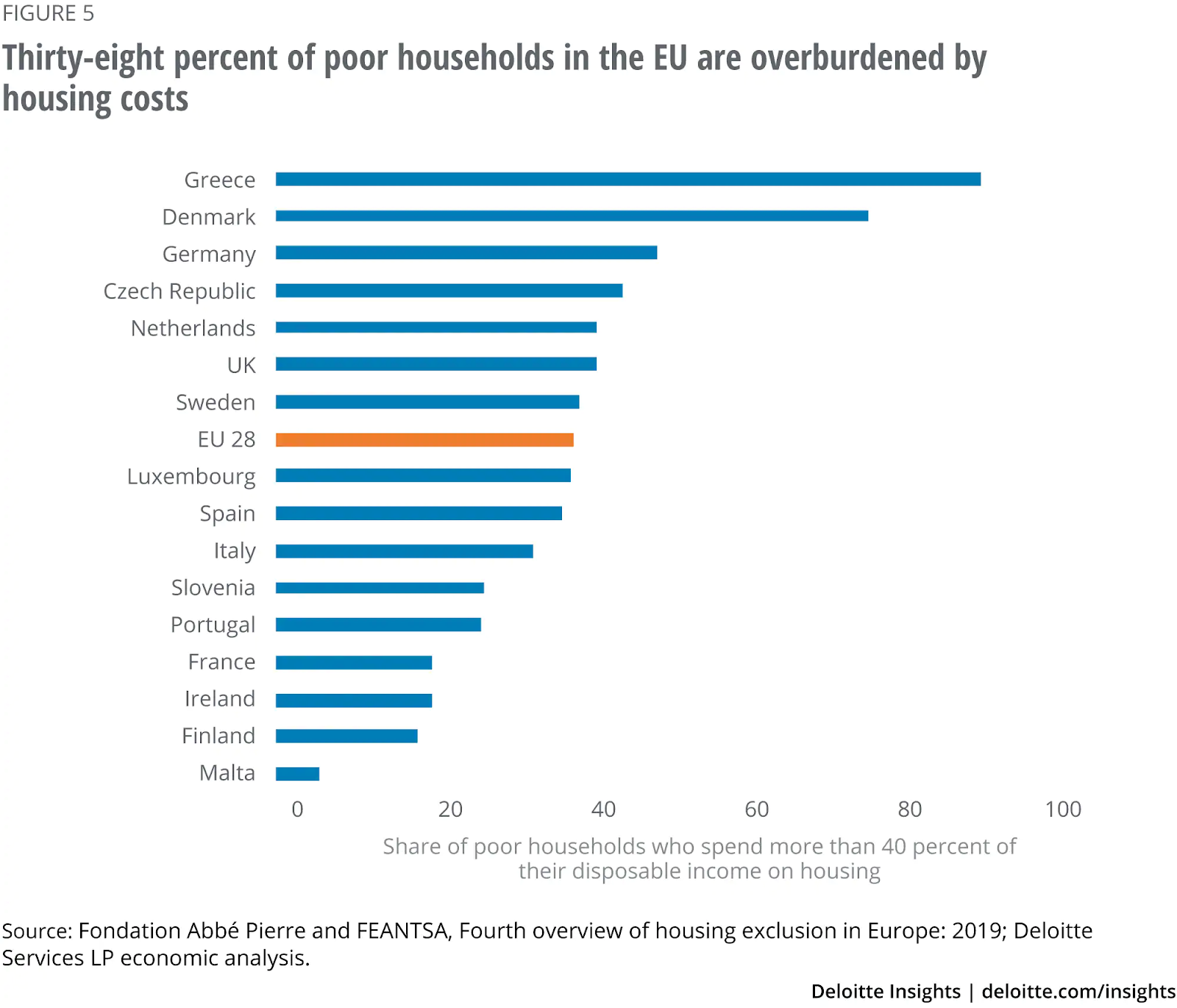 Many actions to fight homelessness and housing exclusion have been taken by individual organisations. For instance, Caritas Europa took action through the  Trochę ciepła dla bezdomnego (A bit of warmth for a homeless person) project, which has provided food and other necessities for homeless people in Poland for a whole year, helping to ease the problem.

The Housing First approach was first developed by FEANTSA alongside the  Y-Foundation (Finland). Not only does it help homeless people find a house but also provides them with support in order to remain housed. This initiative was also adopted by many European countries and has been proven very successful in helping homeless people to get and maintain a home of their own.

Until now, the European Union does not have a common policy to tackle inadequate housing and homelessness. Nevertheless, Member States have developed and implemented individual policy frameworks. Specifically, Denmark was one of the first countries to adopt such a policy, funding it with EUR 65 million and implementing the “Housing First” principle. It also strengthened its Assertive Community Treatment for mental health,  case-by-case management and Critical time intervention.

This summer the Portuguese Presidency of the Council of the EU, the European Commission and the FEANTSA launched the European Platform on Combating Homelessness. This platform aims to promote policies based on a people-centred, housing-led and integrated approach, to aid the sharing of experiences and measures from different cities but also offers Member States the possibility of engaging and working with local actors.

Lastly, the European Union offers financial help to the Member States for homelessness and housing exclusion through the social investment package, and also supports them with funding through the European Social Fund (ESF), the European Regional Development Fund (ERDF) and the Fund for European Aid to the Most Deprived (FEAD).

A major conflict when addressing the issue of homelessness is the process of building new houses that could be provided to people in need, and the amount of empty properties around the EU. It has been proven that there are about 11 million empty houses around the EU and approximately 4.1 million homeless people. The numbers suggest that this could permanently solve the problem of homelessness. However, these houses are mostly owned by banks or individuals and cannot be provided by the government to those in need. On the other hand, building new houses would not only need a large amount of funding, but also have a huge impact on the environment and energy consumption, resulting in worse living conditions for many people impacted by the industrialisation of the natural environment.

Moreover, the funding of aid programmes for homeless people would lead to a cost for all the country’s citizens. A Member State has two major ways to raise money and fund its policies: taxation and borrowing. Both ways demand that citizens pay a larger amount of money to the government each year and also allow the government to have a bigger control over consumer behavior by driving the prices up, creating discomfort to the citizens.

Lastly, the problem of inadequate housing cannot be solved only by offering more affordable houses to people in need, but also by providing them with the ability to sustain that household. People living on the streets have no access to education and are often discriminated against when they are seeking employment, meaning their possibilities to be able to live up to the housing costs are very scarce.

Homelessness and inadequate housing has been a major issue for the European Union in recent years. Many people find themselves living in inadequate housing being vulnerable, especially now with the dangers of the COVID-19 pandemic threatening them more than anyone else. Consequently, many actors try to contribute in order for a solution to be found that not only provides them with a home but also a way to be able to keep it. Nevertheless, there is still no common European policy or an actual solution to the problem, only temporary attempts of helping these people. A permanent solution for homelessness may not seem possible due to lack of education of the homeless people and consequently incapability of keeping their houses, environmental problems and the unwillingness of individuals and banks to offer their empty properties. However, Finland’s Housing First approach as well as other examples such as the New York and federal housing assistance have proven that reducing homelessness to a minimum can be a reality. Homelessness is a complex problem to tackle as it has a lot of factors contributing to its increase but it undoubtedly needs to be addressed now more than ever.