Loneliness is being increasingly recognised as a public health concern due to its detrimental effects on individual wellbeing and social cohesion. According to a report conducted by the European Commission Joint Research Centre (JRC) in 2018, 18% of Europeans experience social isolation. In this regard, what steps should the EU take to combat loneliness?.

Loneliness is the feeling of being isolated or distant from other people or society. It is a mental state of feeling alone, empty or unwanted. The people who experience loneliness feel isolated even though they have the desire to have social connections. It is possible that even if they have many social connections, the quality of these relationships is not the desired one.

It is not an uncommon emotion to experience, but feeling this emotion for an extended period of time can cause dangerous after-effects on the mental and physical health. Researchers have found that loneliness and social isolation is as dangerous as smoking and alcohol consumption and more than obesity and physical inactivity.

The cause for loneliness varies for each individual. We can find loneliness in different age groups, sexualities, genders and nationalities. According to recent studies it has been revealed that young adults are the age group that is most at risk for increases in loneliness. This increase has been exacerbated by the social restrictions imposed during the COVID-19 pandemic, making loneliness be referred to as “the hidden pandemic” or “the double pandemic”. 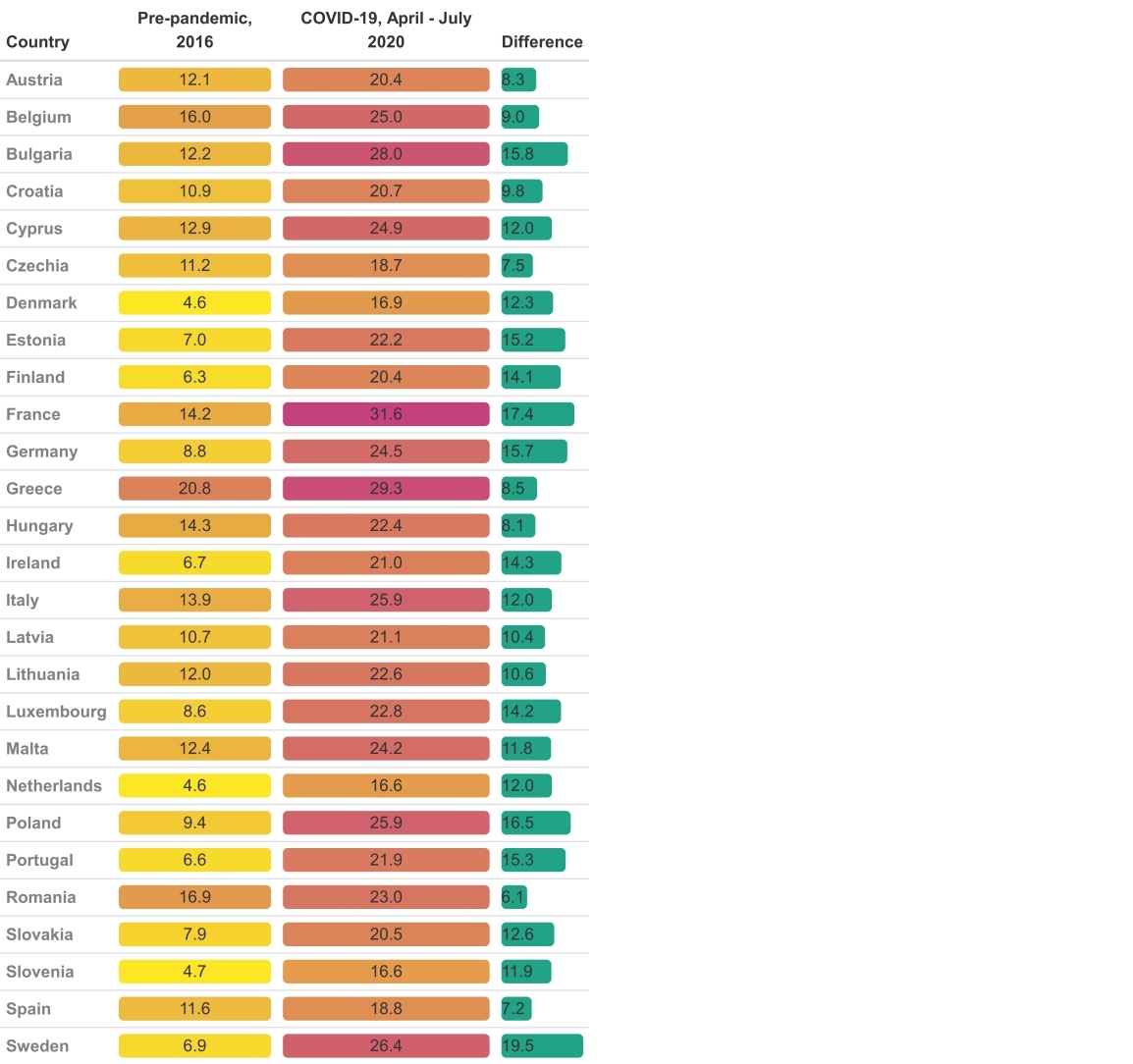 Pre-COVID-19, the European Union (EU) citizens reported in a survey that 12% felt lonely. During the first months of the pandemic the EU citizens felt more lonely resulting in 25% of the citizens. The difference between pre-COVID-19 and the pandemic is 13% in four years. This rise in loneliness is alarming and the rise is not showing any sign of slowing down. The rise of loneliness has, however, been recognized by the EU, which has included it into most of its agendas for upholding mental health.

Through programmes like URBACT, which focuses and discusses isolation in cities by involving locals in the issues that are essential to them, or VulnerABLE, aimed to search for ways to improve the living situation of vulnerable and isolated people across Europe, the EU tries to help people suffering from loneliness . Unfortunately VulnerABLE focuses on nine specific areas which they missed that loneliness can happen to anyone in any situation. Also the project runned for two years. URBACT does not focus on making the people’s need for meaningful relationships, but on connecting people. It is already known that people can discuss and be well-engaging individuals, but still feel loneliness.

Currently there is a policy brief about loneliness made by the scientists from the JRC. This policy brief  summarises why loneliness is a problem the EU should focus on, which policy options the EU has and some recommendations on the best policy option. The JRC also announced to be working further on loneliness in the framework. This will include a new EU-wide data collection and a web platform to monitor loneliness. All of these plans will be carried out in 2022, so no current activities are taking place.

Different Member States take different approaches to tackle loneliness. The Mental Health Foundation (MHF) is a charity that is active in the United Kingdom. Their mission is to prevent mental health problems by helping people understand how they can protect, sustain and understand their mental health. The MHF Young leaders Policy group came up with a list of recommendations for policies. The MHF have also found faults in the current government policies. The policies aren’t well known amongst the target group, people suffering from loneliness. They also found out that one of the Government’s tactics to combat loneliness is social prescribing. But because of cutting funding from the  youth services , who are practicing social prescribing, the services and projects are decreasing which means a limited amount of services and projects.

While the recommendations for policies from the MHF are greatly established, it is important to notice that all of the recommendations are focused on young people who attend school. By making policies for certain groups who have access to certain services, the recommendations are excluding people.In the Netherlands, the ‘Reinforced action plan against loneliness’ project was launched in 2014 by the Dutch Ministry of Health, Wellbeing and Sport alongside municipalities. The aim of this project was to create a long-lasting approach to loneliness by identifying signs early on and to discuss the topic of loneliness in society. This project was executed through a partnership on a national and local level. The national partnership consisted of diverse social organisations, businesses and government organisations. On the local level there were alliances formed. The Dutch Health Ministry made a national commitment of €26 million to support the measures concerning loneliness.

Stigma surrounding loneliness constitutes one of the main issues hindering progress. Lonely people are generally perceived as weaker, more passive, less attractive, and less sincere. Affected people do not acknowledge their state, let alone reach out for support. This is partly attributed to the fact that loneliness is not regarded as a ‘real’ issue, with people feeling like it is not important enough to talk about. With this in mind, not wanting to burden others with an issue that could come across as insignificant is a barrier to people talking about their feelings of loneliness.

Many times, loneliness is associated with illnesses or old age, which closely relates to the reluctance of affected individuals when it comes to seeking help. While this is partly true, it is not entirely the case, with its prevalence peaking among young adults as well as the elderly. The lack of recognition of loneliness as a public health issue is very common, therefore people feel like it is not important enough to talk about.

Moreover, there is a discrepancy among different countries with regards to the prevalence of loneliness. It is less common in adults in northern European countries compared to those in southern Europe. This is highly attributed to the different norms and values of the communities; the minimum acceptable standard of connectedness varies greatly between these areas. Therefore, collectivistic and family-centred countries tend to place community-based and interpersonal relationships at a higher standard, resulting in a higher tendency for people to experience loneliness.

Loneliness and social isolation are much more prevalent than commonly thought, and there is a need to treat them as the critical public health issues that they are. The consequences of loneliness are not only grave for the affected individuals, but affect wider social cohesion. The Covid-19 pandemic exacerbated these issues, especially in young adults. However, through an increased attention on meaningful connections, the pandemic drew more attention to the issue and enhanced social dialogue. At the same time, there is still a huge need for this discussion to be expanded to address the underlying causes of loneliness, the first step of which is addressing the severity of the problem and alleviating the stigma that surrounds it.